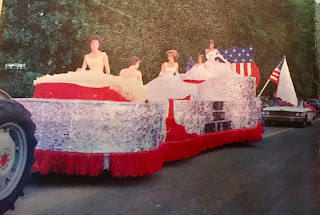 When I was a child, I grew up with a hammer in one hand and a staple gun in the other. My parents owned a professional parade float business called UNIVERSAL DECORATORS.
Our travels were not “universal” however we did travel all over the south of the 1940s, 50s, and 60s providing beautiful floats for festivals and for Christmas stretching from Virginia to Alabama. One newspaper described my Daddy as an “architect of dreams.”
My Mother told stories about boarding a train when I was a baby leaving from Raleigh, NC where I was born to meet up with Daddy. Each year, he furnished floats for the Hampton Watermelon Festival, one of the oldest, if not THE oldest festival in South Carolina which began in the 1940s. I always looked forward to that parade, among many others.
Growing up, we spent 2-3 weeks there every summer where my younger sister and I played and worked on the floats getting them ready for parade day.
It was a wonderful setting not only for our imaginations but to learn our parents’ dedicated, entrepreneurial work ethic early on. The Watermelon Festival was the biggest event of the year in that rural part of South Carolina and usually featured 25 of our floats.
My younger sister and I learned early to staple fringe, festooning, foil, and floral sheeting on floats featuring swans, toy houses, a little train with a caboose, and other fanciful themes. When boxes arrived by train from a Florida manufacturing company it was like Christmas to open the boxes and pull out the colorful materials.
That is when the staple guns went to work, affixing the bright decorations onto the wood and steel frame creating floats to delight the eyes of thousands of children and adults lined up expectantly along the parade route.
When parade time came we watched our beautiful floats lined up by the Parade Marshall, along with high school and military marching bands high stepping and playing popular songs. American flags waved in the breezes.
Our family experienced so many glorious moments, seeing our finished work, parade after hundreds of parades across the south, and knowing the happiness that Universal Decorators created for thousands of folks.
You may ask, what does decorating parade floats have to do with decorating our lives?
When Mother and Daddy designed a parade float, they began with architectural ideas and raw wood; unadorned, nails, and bolts set on top of a steel frame with a trailer tongue. Under their direction, their employees built a sturdy frame which had to withstand the rigors of the two-lane roads from town to town. (In those days, a South Carolina fourteen-year-old could get a daylight driver’s license. In the summers, I began pulling 25-foot floats for hundreds of miles practically the day I turned 14.)
The raw foundation took shape over days and weeks. Sometimes a nail didn’t go in straight, or a piece of wood was not correctly measured. The foundation had to be just right and sometimes changed or reworked.
In our early walk with the Lord, He begins with raw materials too, laying a foundation for our faith. Our Master Decorator often rearranges and/or changes our lives as needed. All the while He is "decorating" us inside with His Holy Spirit while He builds us into an outward reflection of His love.
Just like the sturdy underpinning of my parents’ pride and joy, their 1957 “Miss America” float, Jesus changes our lives into one of faith and purpose as part of His family. In His competent Hands, He lines us up on the personal route of our life’s journey encouraging us along the way to bless others as He has blessed us. However, sometimes life and faith are harrowing. Our lives turn a tough corner along the route, and we wonder, “Will I even scrape by.”
Gritting our teeth and praying, “God have mercy on me,” He pulls us through. No matter where your life’s parade is headed, stay on the route. And praise God when you make it!
1 Corinthians 3:10 “According to the grace of God, which was given to me, like a wise master builder I laid a foundation, and Another is building on it. But each man [and woman]must be careful how he builds on it.” Apostle Paul
Email Post
Labels: Messiah-The Master Designer